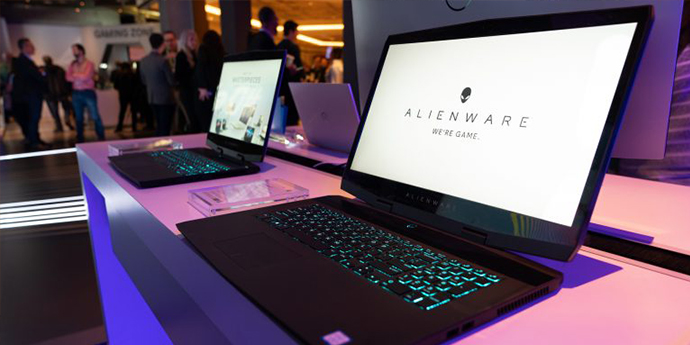 We know if you’re going to spend hours staring at a screen – maybe as the last person standing in a multiplayer online battle arena or completing quests as a fantasy hero – you want it to look real. That’s why we’re excited to share that available for order today, Alienware m15 has become the first 15” light-and-thin gaming laptop to incorporate an OLED display, the gold standard of monitor technology.

Ever-responsive to our community, we’ve delivered on what many of you have been asking for, cranking up the cinematic experience to the next level. Dell and Alienware have a long-shared history of being first-to-market with display technology, earning kudos from gamers and media, like TechRadar, which praised our “breathtaking screens.” We’ve introduced some of the industry’s first OLED 4K and 8K monitors, recognising the ability of Organic Light-Emitting Diode technology (which uses organic semiconductors to create thin, light-emitting panels) to produce deeper black tones and sharper contrast levels.

In addition to OLED being offered in the Alienware m15, a 240 Hz option will also be available to order today as well. As most diehard gamers know, a high refresh rate like 240 Hz renders a cleaner image, enhancing gameplay, especially for competitive multiplayer, and makes for an overall more fluid experience. The 240Hz display will give gamers reduced motion blur and faster reaction that’s essential in the heat of the match. A wide color gamut of 100% sRGB renders beautiful graphics and color accurate gameplay, for visually vibrant gameplay.

The visual technologies give a winning edge to the Alienware m15, which we introduced as Alienware’s thinnest and lightest 15” gaming notebook, an under-five-pound solution for mobile gamers who value portability without having to sacrifice performance. Powerful enough to handle graphic-intense games, it’s driven by 9th Gen Intel Core processors and NVIDIA 20 Series GPUs with Max Q graphics, delivering up to 16 hours of battery life, making it one of the best no-compromise, thin-and-light gaming laptops on the market.

But why should laptop aficionados get all the goodies? For those looking to buy or upgrade a desktop rig, we’ve also begun offering NVIDIA’s GeForce GTX 1660 Ti desktop graphics card, the newest gateway to gaming for the Alienware Aurora R8, Dell Inspiron Gaming Desktop and Dell XPS Tower Special Edition. The GeForce GTX 1660 Ti is built with the breakthrough graphics performance of award-winning NVIDIA Turing architecture, a blazing-fast supercharger for today’s most popular games. It enhances artificial intelligence, programmable shading as well as real-time ray tracing, which enables realistic lighting, shadows and reflections in games. The GTX 1660 Ti also helps you live stream like a pro, with dedicated hardware encoders optimised for Open Broadcaster Software (OBS) delivering 15% improved efficiency over prior cards.

No matter which rig you prefer, laptop or desktop, you can always count on Dell and Alienware for a much-needed visual spectacle.